A 35mm slide projection and digital hologram installation was included in the Alternative Document exhibition at Project Space Plus, University of Lincoln, UK, for 28 days in 2016. Over that period, light from the projectors denatured the photographic emulsion on each of the slides. Originally opaque, with a clear line and rectangle – the dark background slowly turned pink, changing the outcome of the projected image over time.

Through the visible changes, which took place over the course of the exhibition, the installation became an unintentional durational work.

Here, the slides used are part of their own ‘filtration’, illuminated by the cold electronic light from the thin, inbuilt, electroluminescent panel. A self-contained series of tiny images previously hidden within the machines. As in the projector they intercepted light to form an image - in this case they become objects in their own right - bright rectangles made visible by 'electronic' light. 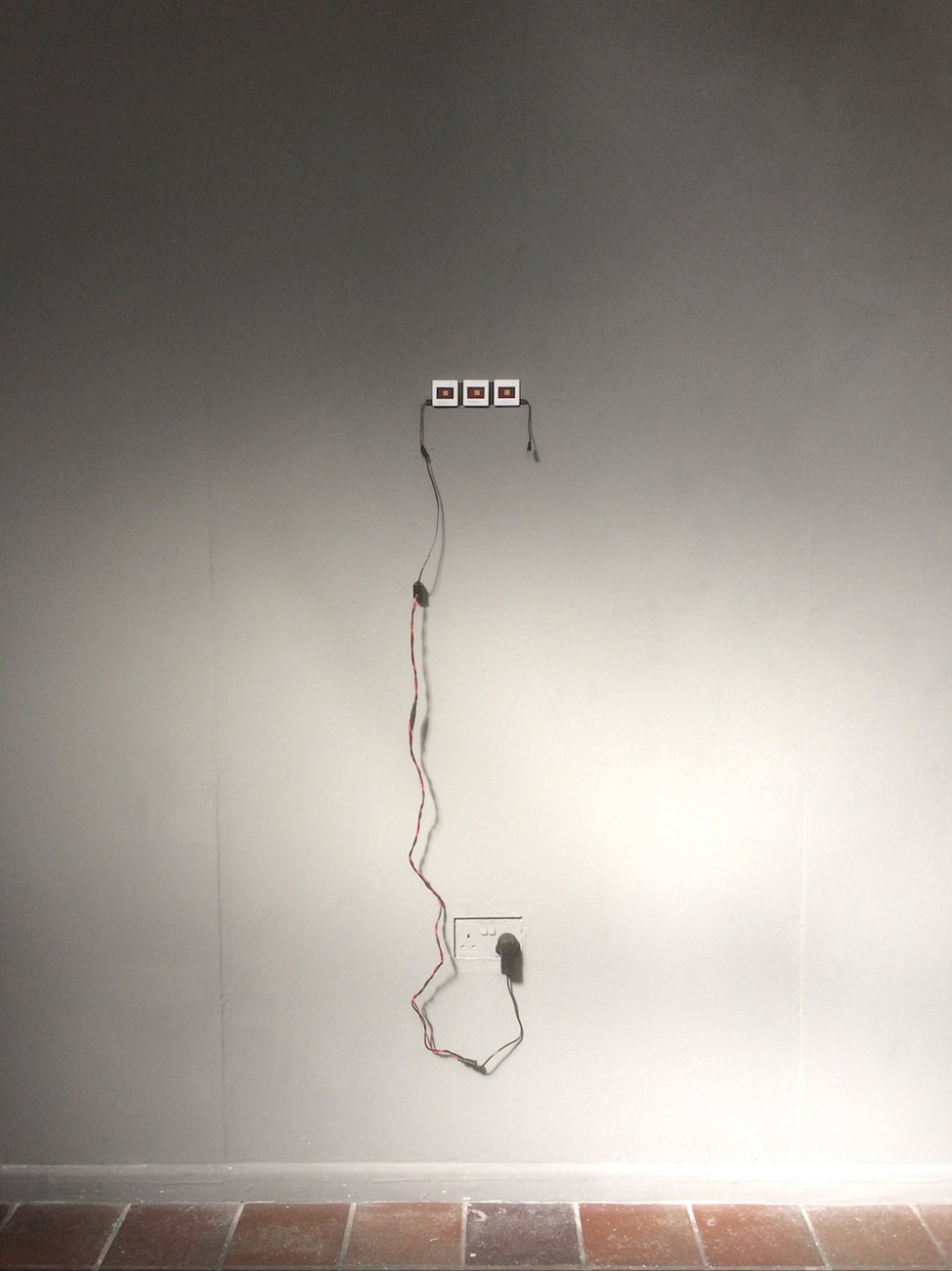 The different coloured fabric sections refer to Edward T Hall's proximity space: In his theory 18" = Intimate space, 48” = Personal space, 144” = social space & 300” = public space. It explores the idea of Hall’s definitive and definite rule, how it works in reality and how it can be used to define/redefine our own space.

The work is constructed with a Brechtian philosophy in mind and attempts to physically manifest the absurdity of the theory. In version 2, the tool to measure space has been developed to be worn by the user.

It can be used in situations when it is required to visually and physically define space.

The tool plays with the connections between utopian living and domestic space as well as how we, as individuals, develop strategies to coexist in communal spaces.

It is an exploration the societal notions and expectations of how we occupy spaces and gives a means to play in this arena. 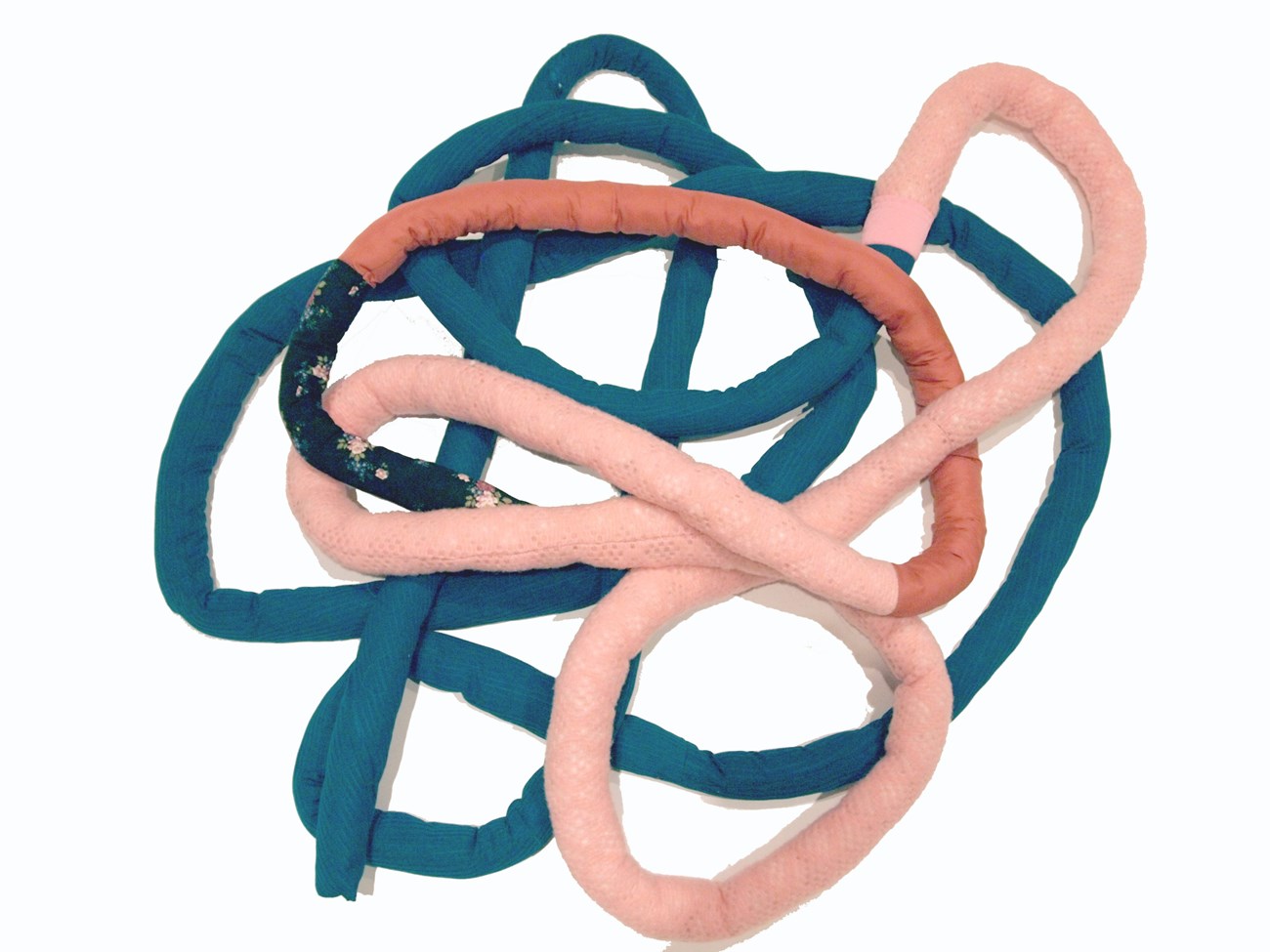 Wool and acrylic on wood on stretcher. 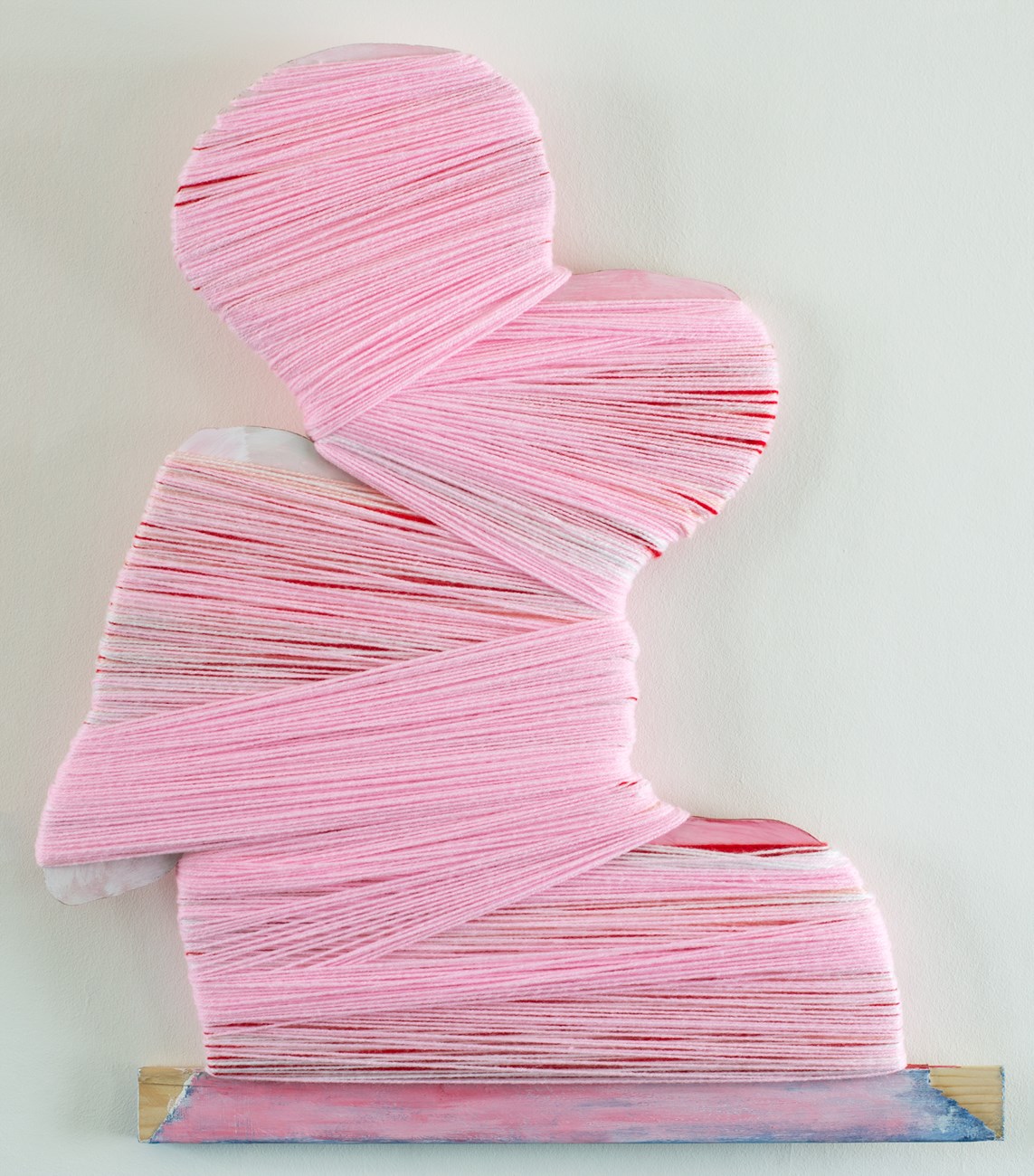 The original version of this work was monochrome and made from aged, discarded floorboards. Following on from that a more recent version of the structure was produced from painted foam PVC. Whereas the foam PVC version utilises solid subtractive colours that reflect on a black surface, and which if all combined would result in (near) black, this acrylic version examines light and colour from a transmitted perspective, focussing on the idea that when all colours are combined it results in white light. It is common knowledge that when white light passes through a dispersive prism it is split into the spectrum – the colours of the rainbow. When conceiving this artwork I envisaged the clear acrylic quadrant base hovering above 3 white light beams that enter from below, travel through the base, (like light hitting a prism), emerging above, split into a dynamic composition of rainbow coloured acrylic, that is on the one hand interlocking yet on the other at odds which each other.

I am very interested in geometry and architecture – particularly modernist buildings, and much of my work is influenced by these subjects. The sculpture was specifically designed to interlock and self-support, which also allows for complete dismantling. The spectral versions were inspired by and are dedicated to my late mother, who always marvelled at rainbows and natural phenomenon.

The viewer is invited to walk around the sculpture and appreciate the line, shape, form, colour and depth from varying angles. 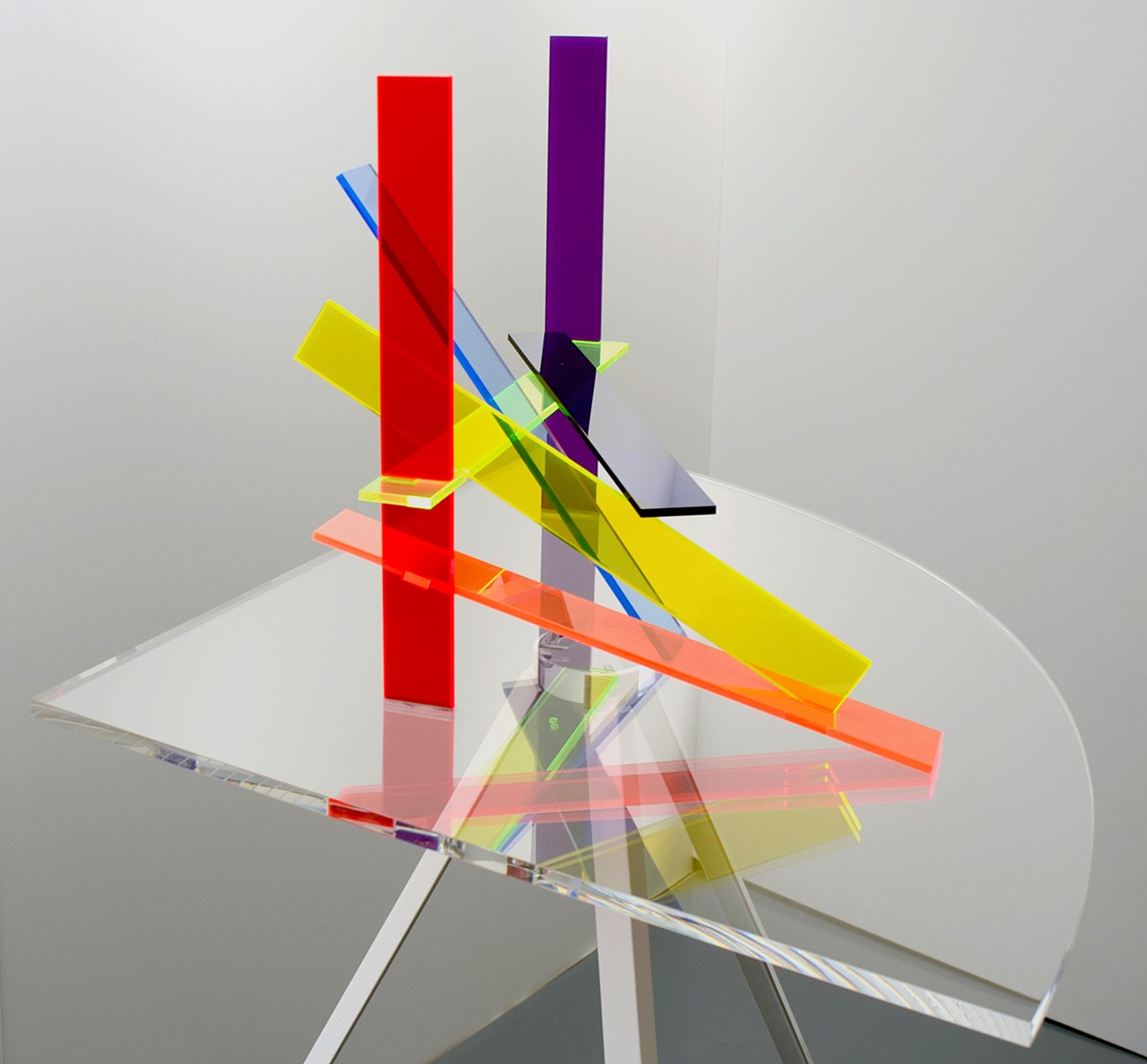 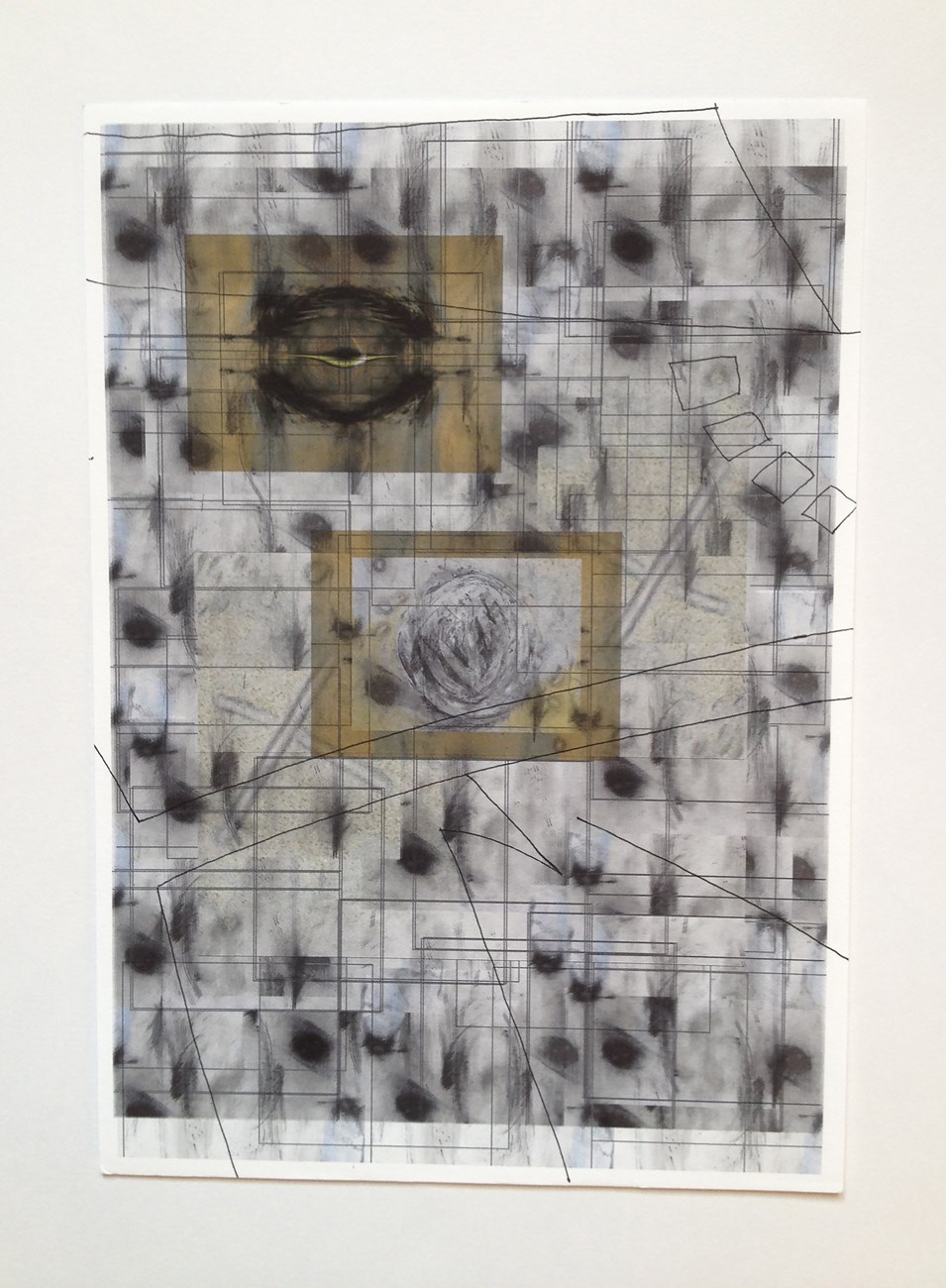