Inspired by the launch of our new community platform, this week's #Five2Watch focusses on artists who have explored collaboration as part of their practice, featuring: Sharon Campbell, Robert Foster-Jones, Victoria Rance, James Eddy and Ann Goddard

The Chandelier of Lost Earrings Sharon Campbell and Lauren Sagar, 2012 - 2013

The Chandelier of Lost Earrings was initially stimulated by a collaboration with staff at St Mary’s Maternity Unit (at Central Manchester University Hospitals), where staff were asked to donate lone earrings, which had formerly been a pair, and which had some emotional resonance or significance for the wearer.

A successful press and social media campaign followed, gathering in many thousands of earrings over 12 months. The act of individuals contributing something of personal value, towards a communal project to form something new, found strong resonance amongst hundreds of people (in the main women) locally, nationally and internationally. Sharon Campbell engaged with people in a number of other ways: a series of partnerships were formed with artists, organisations and businesses donating materials, individuals offering financial support and the artwork itself was made with practical help from a several volunteers, during a residency at Lime (the arts and health programme based at Central Manchester University Hospitals).

"The earring I am enclosing was given to me by one of my sons ... to match the necklace my husband bought to wear at my Ruby Wedding in 2004 when we went on our first cruise to celebrate – a very special memory."
Earring Donor

Earrings were gifted to the project alongside a few written words about the personal significance of the earrings. The sculpture itself comes to represent many individual stories woven together into one object heavy with meaning and significance for those who took part. It drips with glittering jewels, delicate threads of fine chain cascade down the curvaceous structure and close-up the individual earrings form a detailed textured surface made out of the myriad of small forms in every colour.

Jewellery is ultimately deeply personal: earrings are often gifts to the wearer, they are chosen to adorn and make beautiful. Sharon Campbell and Lauren Sagar transcended the individual and personal by integrating the individuality of these special objects and the personal stories attached to them, by synthesising the component parts into an evocative sculptural work that stands alone and speaks of human emotion, memory, loss, beauty and love.

"It has been brilliant hosting the chandelier at Towneley Hall. I was very aware that it had been well received in its previous venues, but even with that in mind I have been surprised but just how popular it has been during its time here. A fair number of people I've spoken to have said that they've made the trip to Towneley especially to see it, some of them for the first time."
Rebecca Hill, Curator Towneley Hall Gallery

The Chandelier Of Lost Earrings has to date been seen in a range of settings to date; installed in The Summerhouse at St Mary’s Maternity Unit, Federation House, Manchester, Towneley Hall Gallery Burnley, 20:21 Visual Arts Centre in Scunthorpe and Piccadilly Place in Manchester, Rochdale Touchstones Gallery, Swiss Cottage Library London and the Glasgow Women's Library. 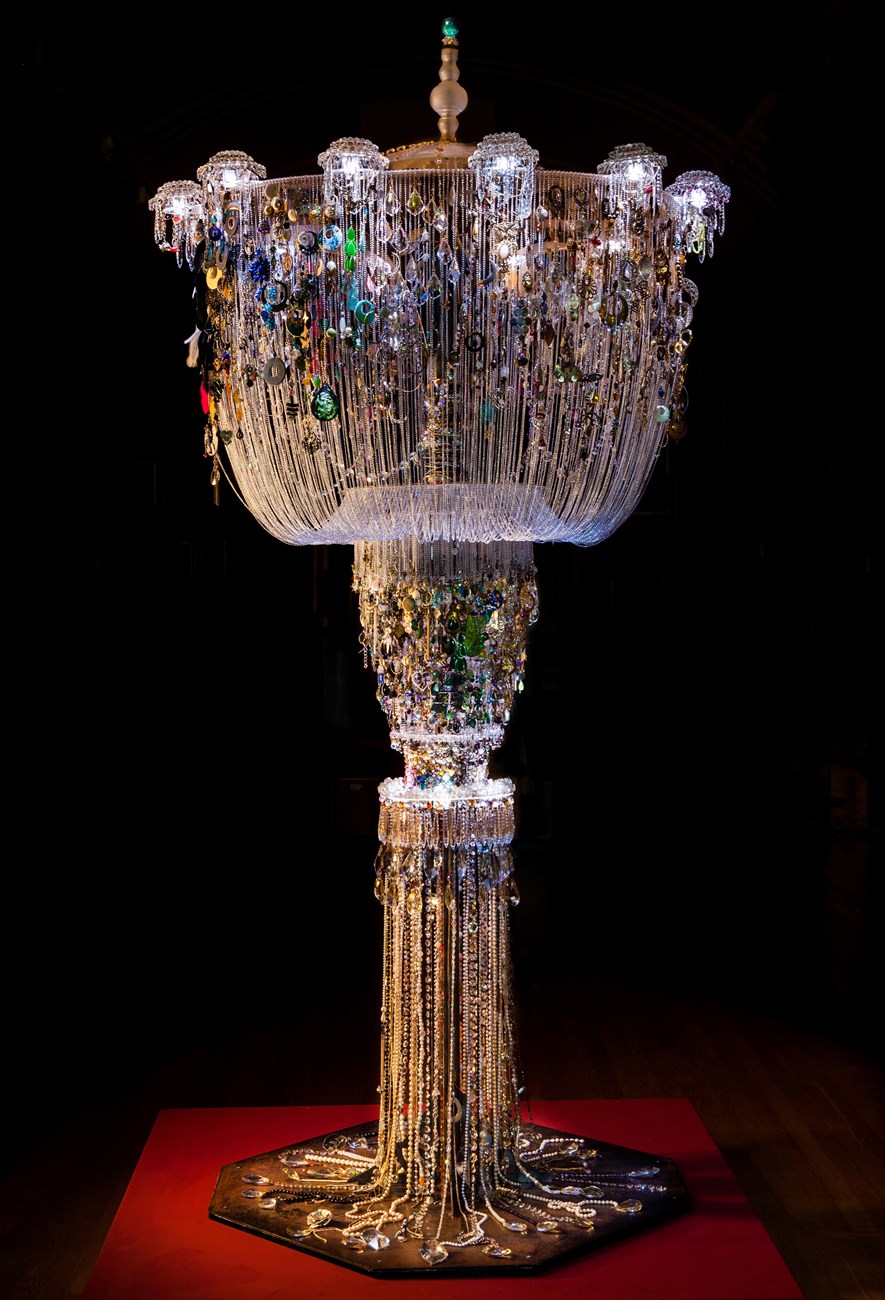 Readings: A collaboration with Diana Granger-Taylor, 2016

As part of Horizon at Roaming Room, London, UK, Tarot reader and teacher Diana Granger-Taylor offered readings for visitors to the exhibition opening.

The readings were held in a private room within the gallery, so as to provide those participating with a private one-on-one encounter.

This was an opportunity for many to have their first experience of a Tarot reading. My hope was that those present would have a chance to explore the process and dialogue involved in such a reading, as well as potentially attain new insights into the structure and symbolism of the works included throughout the rest of the exhibition through this new knowledge. 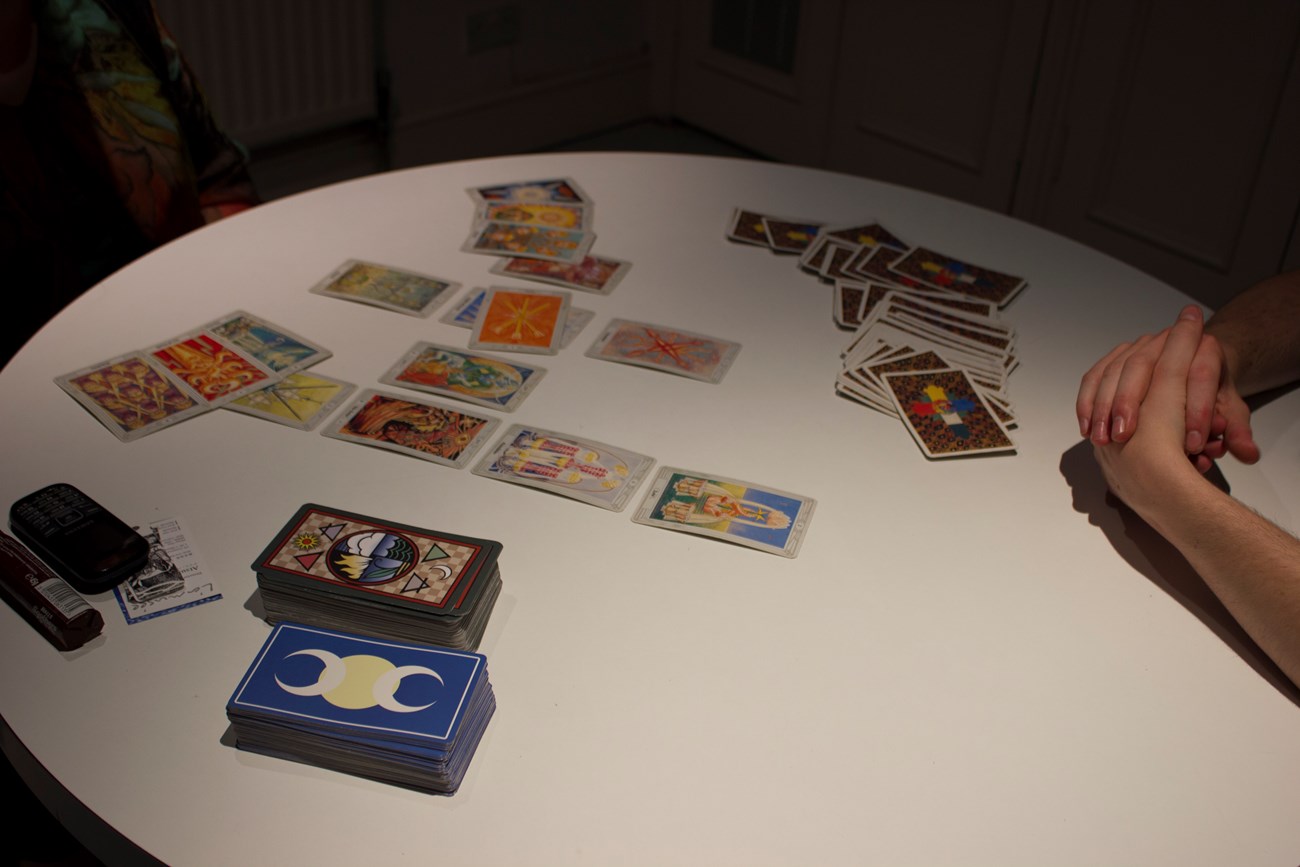 Exhibition and performance Victoria Rance in collaboration with Clare Whistler at The Lucy Bell Gallery Hastings.

An exhibition of wearable sculptures by Victoria Rance made over several years shown with photographs of interactions in collaboration with Clare Whistler made especially for this show. 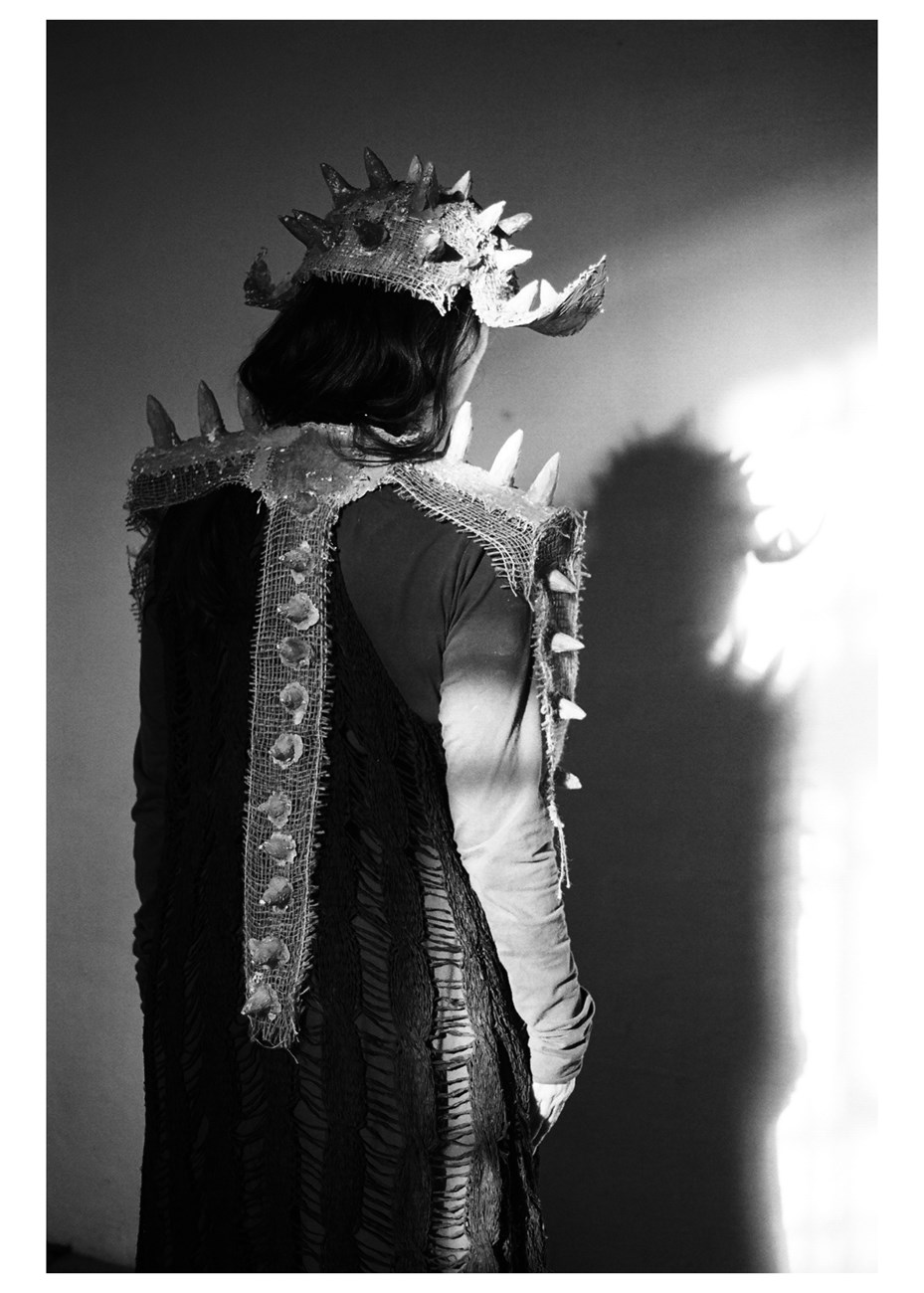 An arts, science and horticulture collaboration. Funded by Exeter University and The Eden Project collaboration fund.
The Landscapes for life project is a collaboration between an Exeter University researcher, an Eden Project horticulturist and an artist. Inspired by a Phd studying our experiences of nature as we go through life. Particular focus was given to how and why particular natural setting become more or less meaningful with shifts in our life circumstances, relationships and well being priorities.
The River of Life sculpture, made of individual river boulders, describes the geographical life of a river. The sculpture is set in a garden that will mature over time, including a giant redwood and a dawn redwood tree. 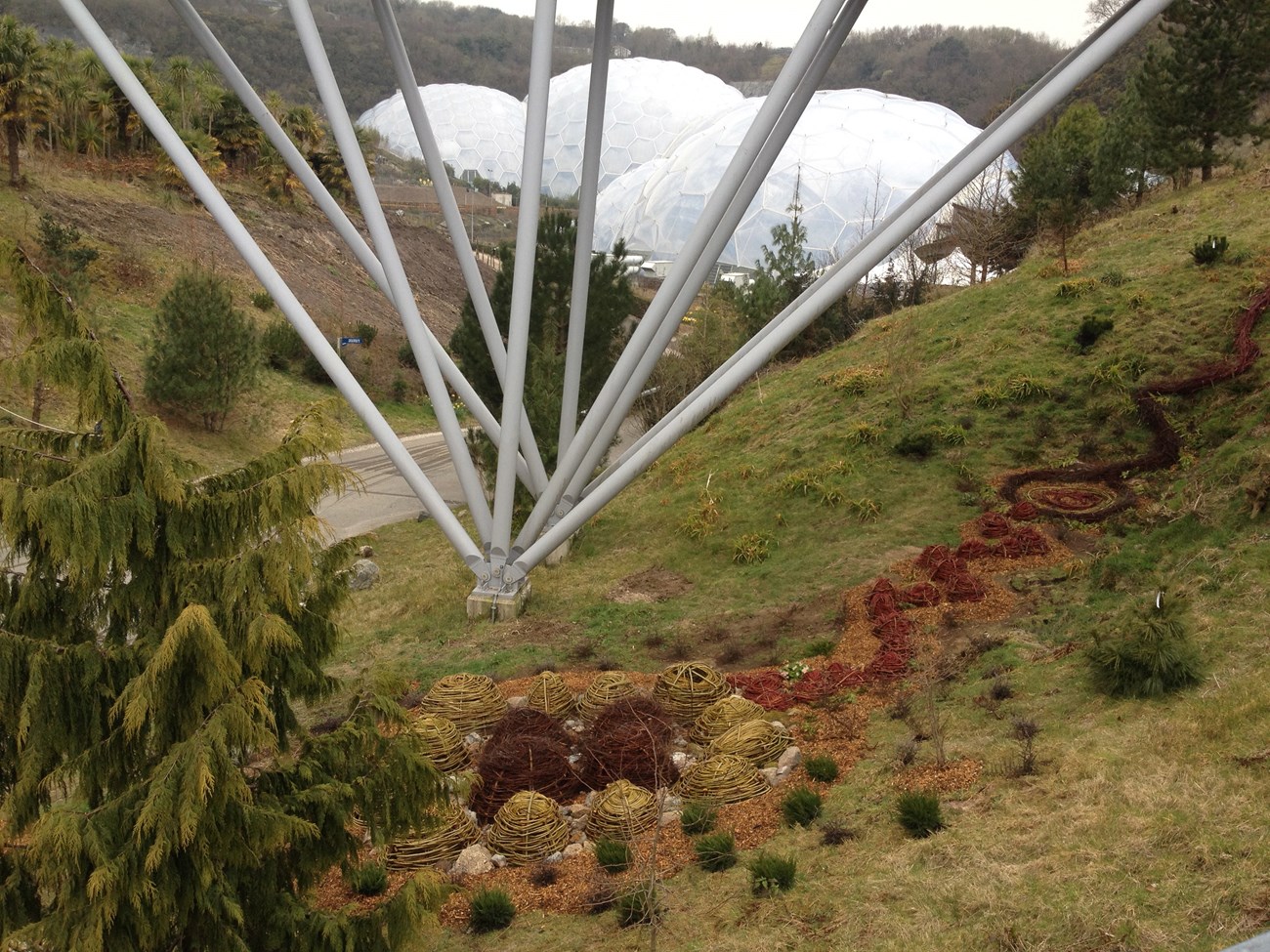 ‘Assemblages’ is part of a larger body of work resulting from the ongoing collaboration between artists Ann Goddard, Jae Maries and Shuna Rendel. The collaboration entails responding to each other’s work.
For this piece, Ann researched Jae’s process, observing the way in which she combines layers of fabric, stitch, and recycled scraps, obscuring or erasing their original characteristics with paint and gestural paint marks. This informed Ann's decision to recycle mixed media scraps from her own studio, wrapping disparate layers together to partially hide or obscure what lies beneath. The words obscure and erase influenced both the surface treatment of each of the scraps, and the construction of the small, collaged, assemblages. 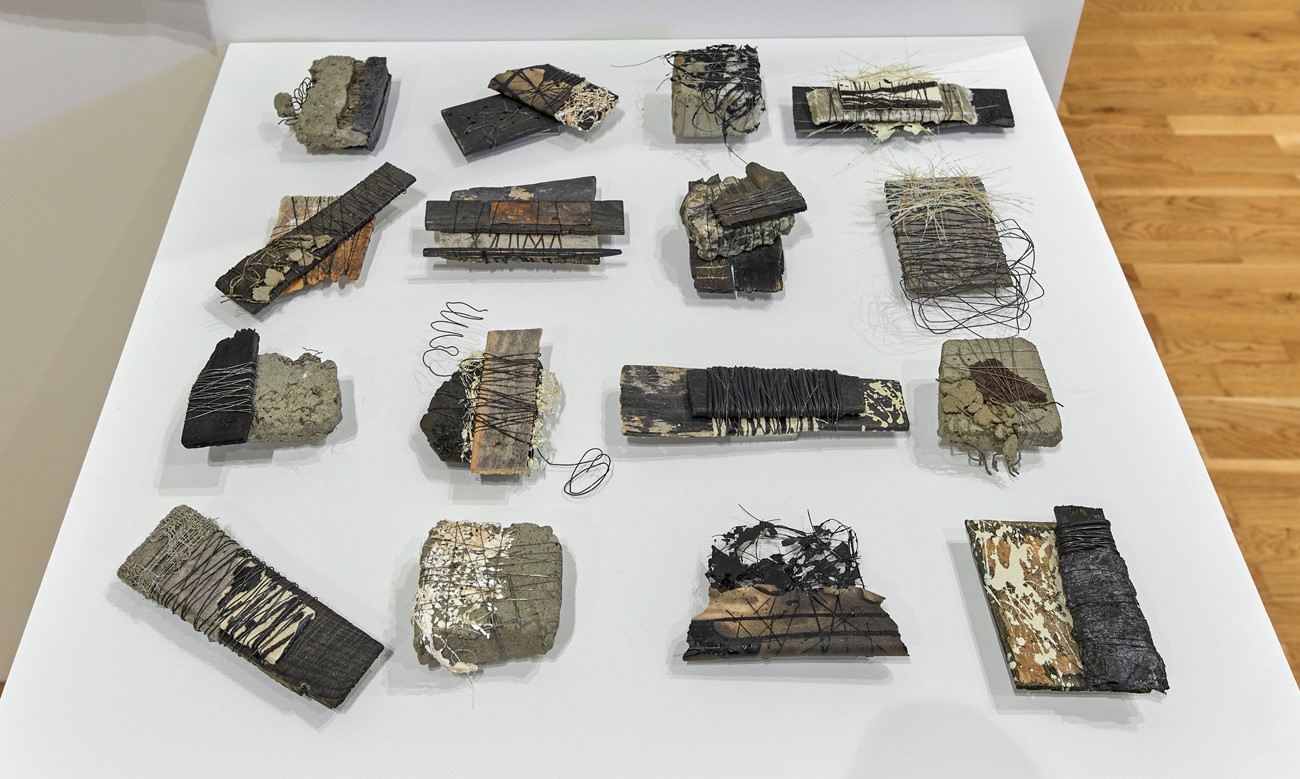