Mirror
Produced as part of solo exhibition 'We Can Only See Today' at Ty Pawb, Wrexham.

Part 2 of two mirror pieces hung opposite each other at either end of the gallery.

Progressing forward while simultaneously returning again and again to the same point. 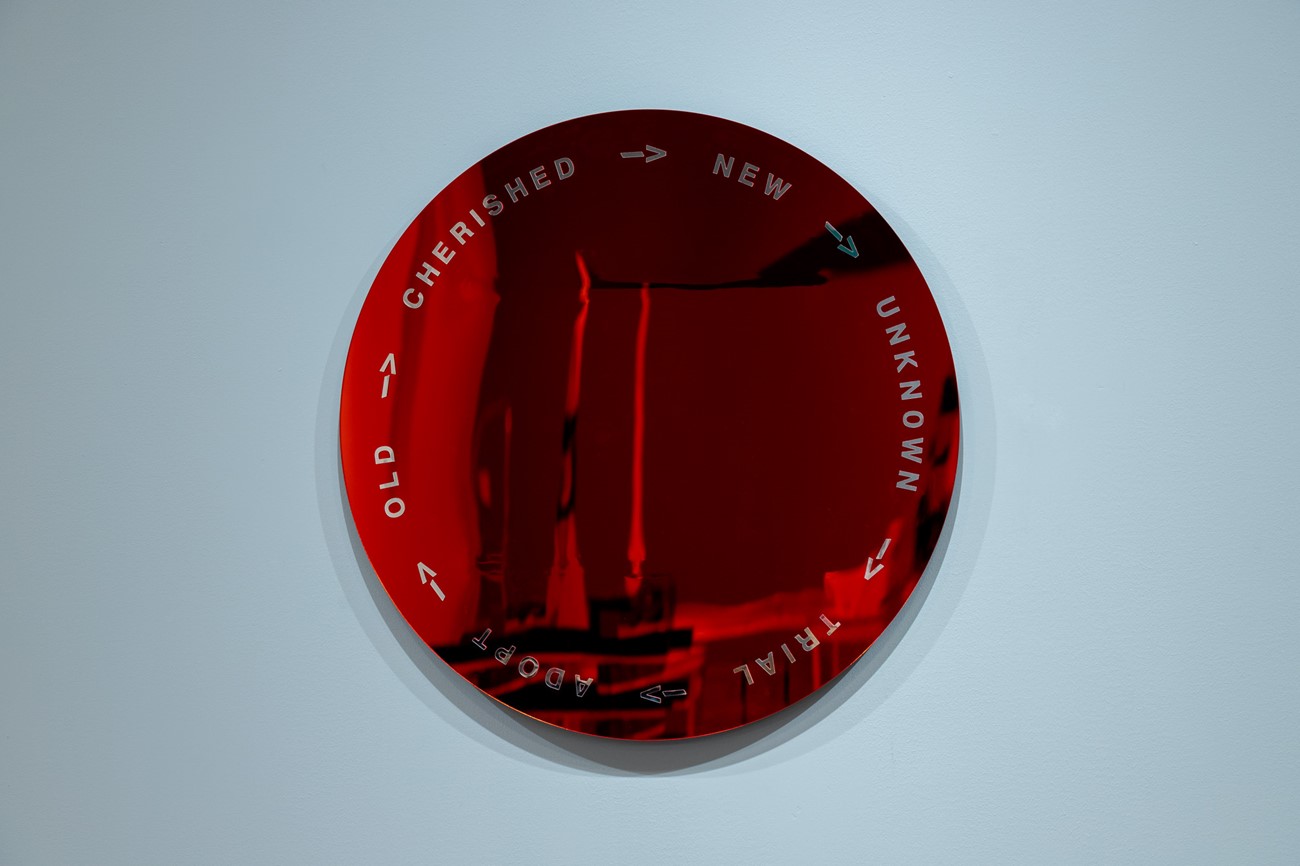 CONVERSATIONS AS A REFLECTION OF MY COLLECTIVE SELF, 2017

Three 5 min one-on-one performances with an audience. For each time slot, Jacobs pulled a card from her Tarot deck the previous day to determine the reading. The Tarot card was translated into a new
collection of symbols which aligned signs towards the relationship between productivity, technology and labour, such as the “refresh” button and the “next” button.

This new symbolic language combined with an astrological reading fo the time of day and location of the site, produced a reading that reveals intuitive insight into the character of the participant and the affect this might have on their own forms of production; resulting in the construction of a collective form of self, initiated by participation in the event. 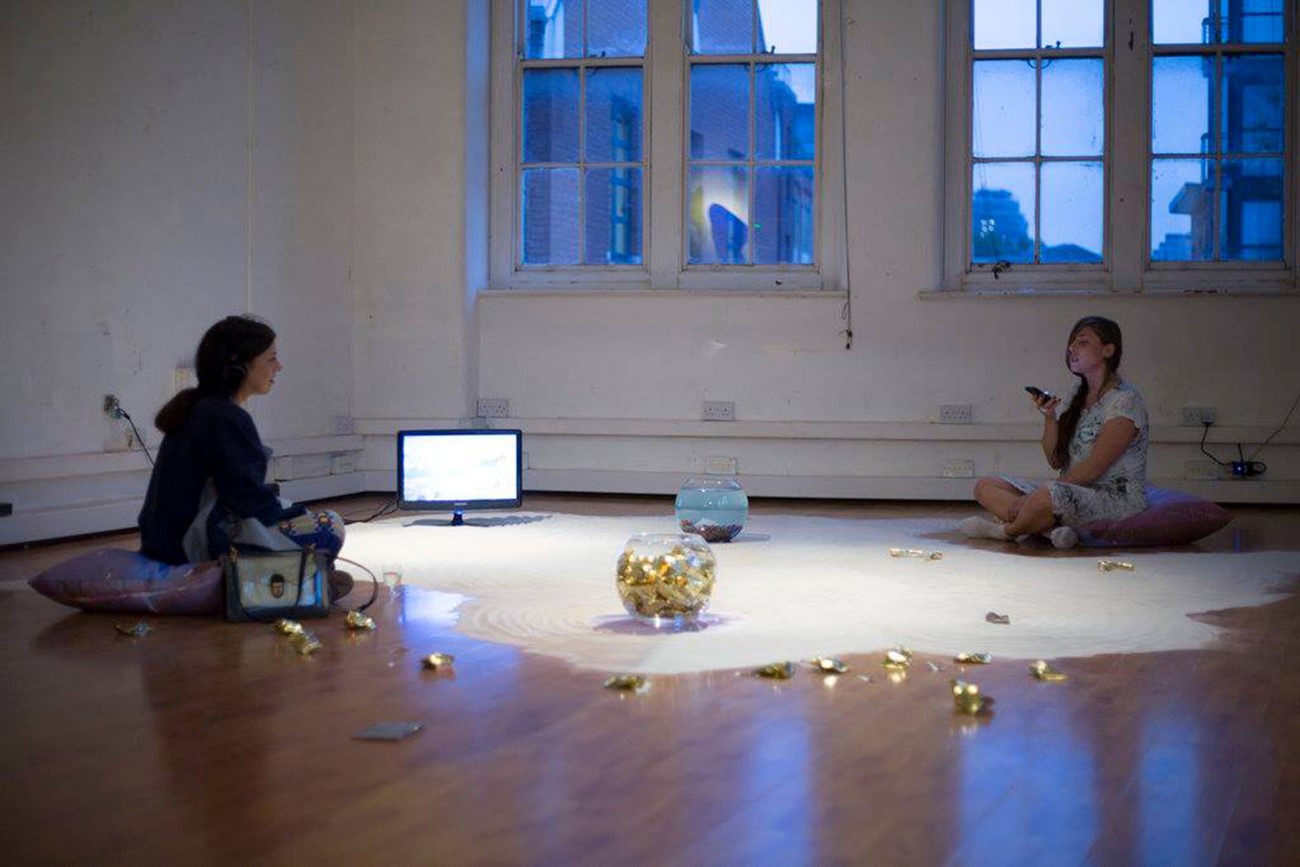 The soluble capsules contain text that has been hand stitched in mirror-writing. In order to read the words it is necessary to look through the mirror. The distorted view of how eating disorder sufferers see themselves is reflected in the words, ‘bulky’, ‘gigantic’, ‘fat’... 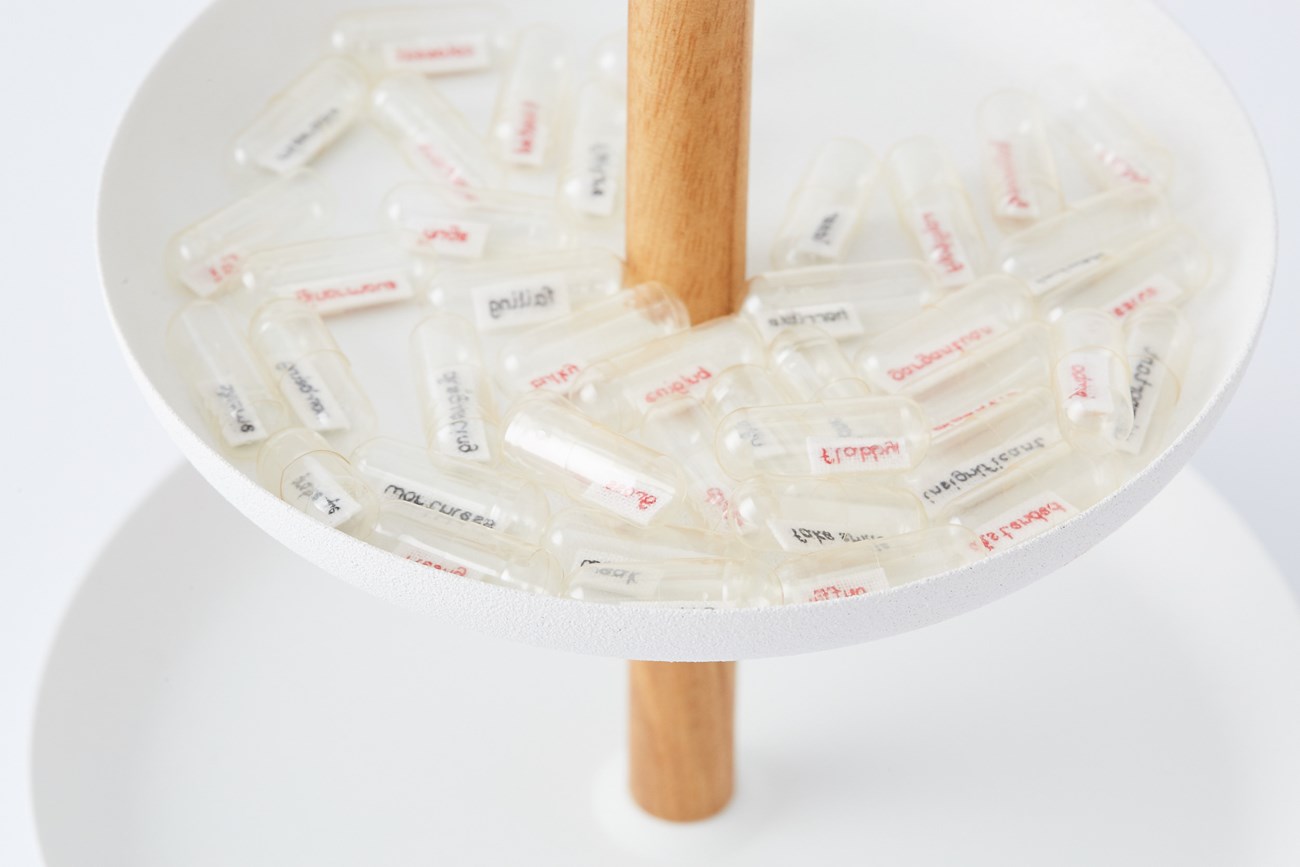 Reflect (verb) a surface or body which throw’s back heat, light or sound, without absorbing it., 2020

This Installation titled Reflect (verb) is to go alongside my Still Life series of large scale drawings.

The installation is a large scale, immersive space in which the viewer steps into, and is enveloped by the material doors.
The outside is light, while the interior space is dark, lined with black material in which the viewer can be immersed to view a light box coming down a bit below eye level.

Beneath the light is a black rectangular podium the same dimensions as the light box.
The podium comes up to meet the light, with a gap of just a few inches.

Embedded in the podium is a perspex box filled with water, in which the light is reflected.

Within the light panel are the silhouettes of scattered dead insects, only easily visible in the water’s reflection.

This piece is echoing the precariousness we are facing in relation to climate change, the electricity being close to the water. The gap growing ever smaller as devastation across the planet grows.
The water also being a symbol of rising sea levels and growing frequency of flooding.

The thin strip of light within the dark room is also to symbolize a glowing sarcophagus, the death and attempt to preserve nature, holding it in such high regard. Everything about our world and the way we look at it is all a matter of perspective, as wee see things from our own unique/selective point of view. However, our perspectives of the world are constantly changing as a result of the passage of time. In the 'Timeless Motions' & 'Timeless Reflections' Series, the artworks were produced in response to the idea of making the world last twenty minutes.
Through the use of pinhole photography, these works explored the psychological relationship between time, movement and light, all of which are affected by our perception of them. When the viewer is faced with images taken over a longer period of time, which appear more like psychological inkblot prints, how will they interpret the imagery? What forms or patterns will they see that no one else does? Especially when faced with two sides of the same image, a positive and negative. 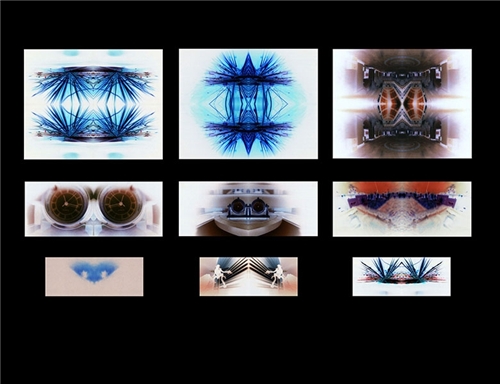