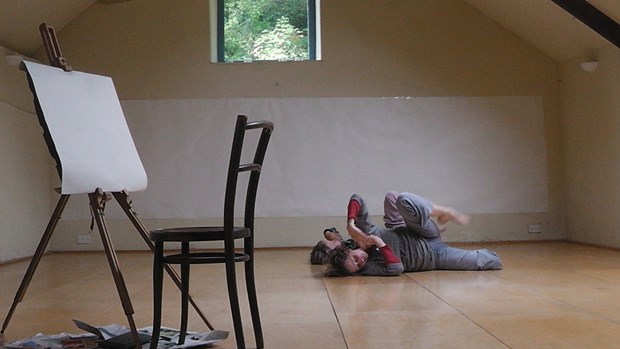 Conceived and directed by Jessica Lerner in collaboration with performers Eeva-Maria Mutka and Stirling Steward.

A series of live performances will be presented throughout the day. The series includes a collection of performance sketches.

The audience are invited to witness felt relationship, both visceral and incomplete. Also how situations unfold with the performers live decision making processes in creating.

Jessica Lerner’s work is personal, investigating the intimacy between one’s self and sentiments of things. Here her own problematic ‘making sense’ of artistic identity is suggested by her shift from movement to painting to photography.

The work is also devised in response to the friendship between the three performers, having shared experiences of motherhood during and after long involvement with movement awareness and performance. Eeva-Maria Mutka, Stirling Steward and Jessica Lerner all moved to West Wales in 2002 from London where they had shared a similar career in movement based performance. They are all trained in movement improvisation and forms of somatic movement.

The work is performed through improvisational scores with psycho-physical motivation. Momentary stories or transient personal histories are played out and new or forgotten perspectives on sharing space are presented.

Presence and the emotional body are expressed through the interplay between movement in dance, drawing and photography. A series of performances throughout the day will present different modes of interplay. Using natural movement from awareness of specific modes of perception, the performers represent such abstracts as ‘tangibility’. In a solo this is emphasised by the juxtaposition of photographic representation of them hanging in the space. Within the series live performance analyses the presence of the mediums of painting, photography and film.

Created with assistance from The Arts Council of Wales

With Thanks to Judi Hughes for creative consultation.